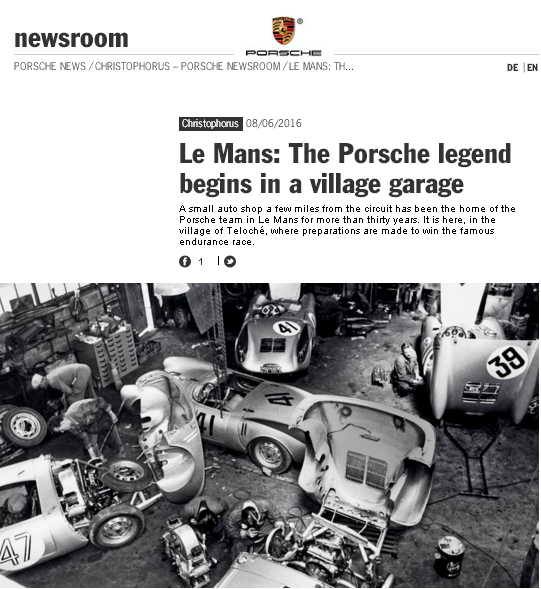 A small auto shop a few miles from the circuit has been the home of the Porsche team in Le Mans for more than thirty years. It is here, in the village of Teloché, where preparations are made to win the famous endurance race.


France, June of 1951. A garage on the Rue du 8 Mai in Teloché, a village some four miles south of Le Mans. On the eve of the nineteenth 24 Hours of Le Mans race, mechanics are working feverishly on two silver Porsches with starting numbers 46 and 47. The atmosphere is tense. The lead-up to the race has been anything but smooth—three of the four 356 SL cars prepared in Zuffenhausen did not survive the test-drives. The night before the race, the mechanics are still trying everything they can think of on number 47, but to no avail. Porsche enters only one car in the contest.

The automotive world is stunned to hear that Porsche will race in Le Mans. The carmaker, founded in 1948, is the first (and only) German brand to enter this most venerable of French endurance races in the aftermath of World War II. The announcement is not only motorsports news but also a political statement. Just a few years after the war, German carmakers are not exactly welcome in France. True, at last year’s motor show in Paris, Charles Faroux—the director of the race in Le Mans—expressly called for Porsche to participate, but his compatriots still harbor a good deal of resentment toward Germans, stemming from the occupation. The decisive impetus for Porsche to take part finally comes in the form of Auguste Veuillet, the future exclusive importer for Porsche in France. He wants to drive in the race himself, and he also plans to handle local organizational matters for Porsche with motorsports director Paul von Guilleaume.

For the racing team from Zuffenhausen, Teloché is an ideal location

But where should the Porsche racing team be based? Veuillet finds a garage in Teloché. Its owner, Georges “Jojo” Després, rents part of the auto shop to the team. It is not an easy decision for Després, who is criticized by neighbors and customers for bringing Germans into the village. For the racing team from Zuffenhausen, however, Teloché is an ideal location. Its cars can be driven straight to the circuit without having to be loaded onto trailers or trucks. Moreover, there is still a rear entry to the circuit at the end of the Mulsanne straight, which means the team can avoid congestion at the main entrance.

The 1951 race takes place on June 23 and 24. Auguste Veuillet and Edmond Mouche drive the 356 SL to a class victory for engines under 1,100 cc. They also place 20th overall: a noteworthy result. The victory earns Porsche a fair amount of approval and attention, both in France and internationally. Furthermore, Le Mans henceforth becomes a fixed date on the Zuffenhausen racing calendar. Porsche enters three factory cars in 1952 and 1953, and then four beginning in 1954. With two mechanics per car plus the racing director and his staff, an ever larger team sets off each year for Teloché.

The villagers rent out their guest rooms, bedrooms, and children’s rooms to Porsche, and many friendships are formed over the years. No one minds when the cars take loud test-drives through the village in the morning or the evening, or when the team returns from its practices after midnight—au contraire. At Madame Peschard’s Café des Sports, breakfast awaits the Porsche crew at seven in the morning, and an evening meal is also ready even if they come back late from the circuit.

With the advent of Group C and the Porsche 956 in the early 1980s, a new age of racing begins—one that requires substantially more technical preparation. The mechanics start to work directly at the drivers’ camp, right next to the trucks that carry the cars. From then on, Porsche’s auto shop in Teloché is relegated to the pages of history.