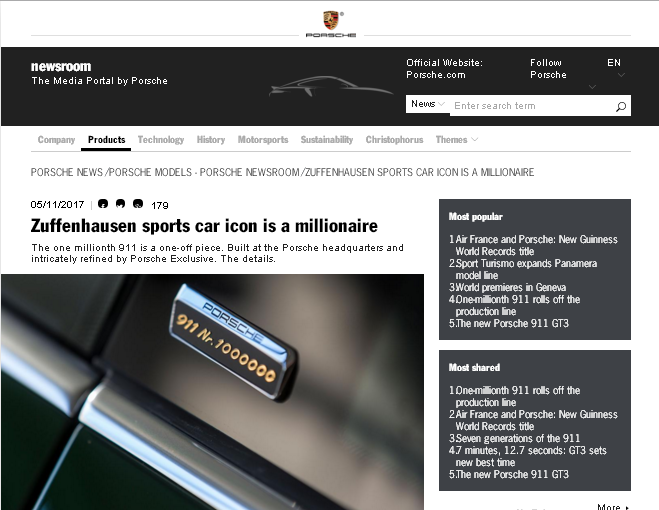 
The one millionth 911 is a one-off piece. Built at the Porsche headquarters and intricately refined by Porsche Exclusive. The details.

New record for the Porsche 911: On May 11, 2017, the sports car icon marked the production of the one millionth vehicle. For nearly 54 years, the Porsche 911 has been at the heart of the Porsche brand and has played a major role in its current success. There are very few other cars in the world that can look back on such a long history of tradition and continuity or that have achieved as many race victories. Manufactured in Zuffenhausen right from the start, each generation sets new standards in terms of driving dynamics, efficiency and everyday convenience.

The one millionth 911 is a one-off piece. Built at the Porsche headquarters and intricately refined by Porsche Exclusive, which has been responsible for adding details to limited and exclusive small-scale series at Porsche for over 30 years. The anniversary Coupé contains the quintessence of over half a century of 911s: Sporty, yet suitable for everyday driving; powerful, yet efficient; exclusive, yet timeless. The sports car model is based on the 911 Carrera S, with a power-boosted 331-kW (450-hp; Fuel consumption combined 9.4−8.3 l/100 km; CO2-emissions 214−188 g/km) flat engine and a seven-speed manual transmission.

A one-off with historical accents

Painted in the special colour “Irish Green” and individually equipped with leather seats whose centres feature the original pepita pattern from 1964, this unique car is reminiscent of Ferry Porsche’s first official 911. The company founder had one of the first series cars with the chassis number 300.003 painted green, his favourite colour. He was presented with the car on October 19, 1964. In the 1965 model year, Irish Green was finally included as a new paint colour in the colour scheme, and can still be ordered as an individual colour at Porsche today.