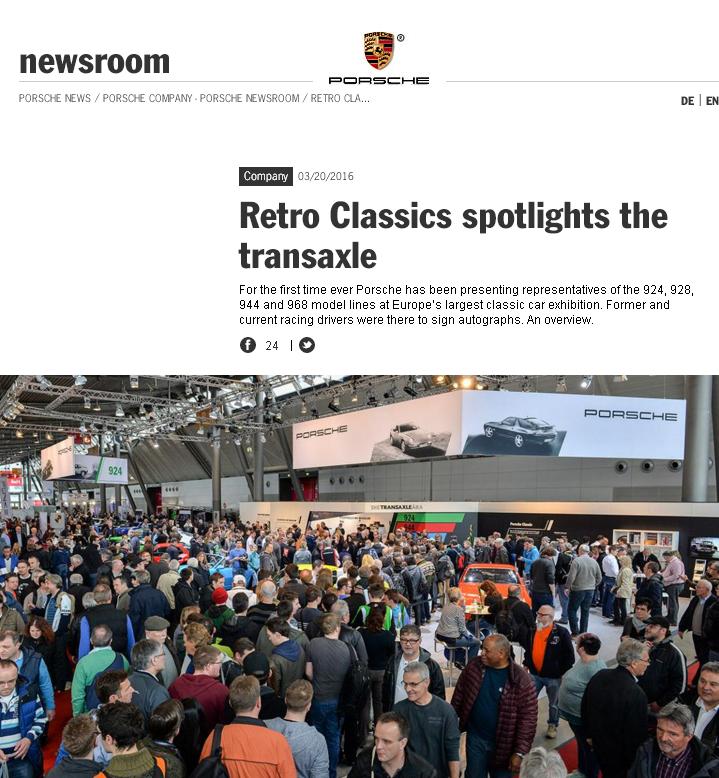 
Retro Classics spotlights the transaxle
For the first time ever Porsche has been presenting representatives of the 924, 928, 944 and 968 model lines at Europe’s largest classic car exhibition. Former and current racing drivers were there to sign autographs. An overview.
24

Retro Classics, Stuttgart, 2016, Porsche AG
Premiere at the Stuttgart Trade Fair Centre: to mark the 40th anniversary of the transaxle models, the Porsche Museum has for the first time been showing one representative each from the model lines 924, 928, 944 and 968 at Retro Classics. In the years between 1976 and 1995, Porsche built a generation of sports cars that were far removed from the established principles of the 911. With water-cooled front engines and transaxle gearboxes on the rear axle, the Porsche engineers in Weissach of that era were venturing into new technical territory.

In a discussion featuring experts at Europe’s largest classic car convention, two pioneers of this technology looked back on the celebrated generations: Harm Lagaay and Georg A. Ledert. The former head of the Porsche design department in Weissach, Harm Lagaay, was among those who played a key role in the design of the Porsche 924. As head of publicity of Porsche for many years, Georg A. Ledert was also actively involved in shaping the transaxle era.

Other icons from the history of Porsche in the persons of Walter Röhrl and Hans Herrmann were also making guest appearances at the exhibition. Walter Röhrl – a legend from the 80s and 90s – remains to this day the only German world champion rally driver. Hans Herrmann, on the other hand, is the only racing driver from Germany to win the four great classics from his era: the 24 Hours of Daytona, the Twelve Hours of Sebring, the 1000 Kilometres of Paris and the 24 Hours of Le Mans.